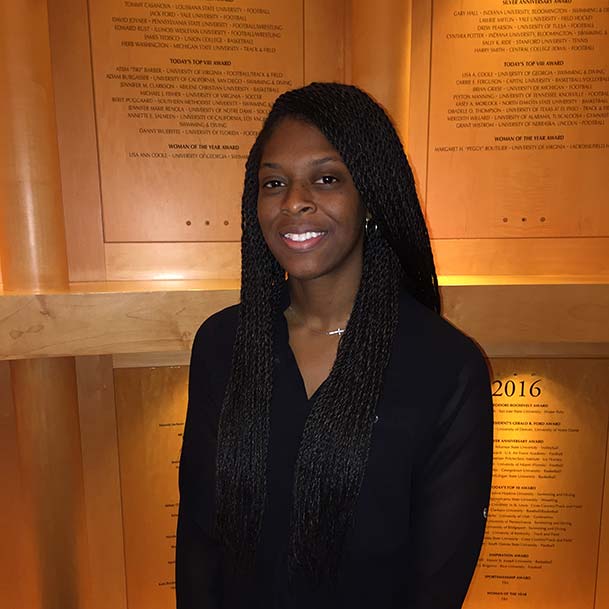 WILSON, N.C. — August 17, 2016 — Barton alumna Brianna Thomas, ’15, Finance and Accounting Assistant for the NCAA in Indianapolis, will share her compelling story as the featured speaker for the 115th Opening Convocation. The annual campus event is scheduled for Tuesday, Aug. 23, at 11 a.m. in Howard Chapel.

A distinguished tradition at Barton College, Convocation signifies the official opening of the academic year, and provides a particularly meaningful milestone for freshmen as they are ushered into the Barton Experience.

“We are delighted to welcome Brianna Thomas as the featured alumni speaker for Barton’s 115th Convocation,” said Dr. Gary Daynes, provost of the college and vice president for academic affairs. “Bri has been a role model for students and alumni alike since she first stepped on our campus.  Her commitment to academic excellence and leadership on and off-the-court made her a wonderful part of our community. And since graduation, her career path has shown the same tenacity that made her successful here.”

A native of Tampa, Fla., Brianna Thomas joined the Barton College community as a freshman in 2011 and never looked back. She hit the basketball court running and, during her four years at Barton, Thomas worked her way up to a starting position and captain of the women’s basketball team. During her collegiate career, her academic and athletic honors included the 2011-2012 Wilson Rotary Cup recipient (highest freshman GPA), the 2012-2013 DII Athletic Director’s Association Academic Achievement Award, 2013-2014 and 2014-2015 Conference Carolinas Academic All Conference, and the 2015 Edward L. Cloyd Award (highest GPA of graduating senior athletes). Also during her senior year, Thomas was named a 2014-2015 finalist nominee for the Murphy Osborne Scholar-Athlete Award, the Conference Carolinas league’s highest accolade.

This academic scholar and student leader achieved a 3.98 GPA during her tenure at Barton. She was inducted into Barton College’s North Carolina Gama Gamma Chapter of the Alpha Chi National College Honor Society and served as its vice president. In addition, she was co-chair for the Barton College Student Athlete Advisory Committee (SAAC), a member of the Sigma Beta Delta International Honor Society for Business, Administration, and Management, and a volunteer for The Spot: Wilson Youth United. A triple academic major, Thomas graduated summa cum laude in May 2015 with Bachelor of Science degrees in Accounting and Business Management, as well as a Bachelor of Arts degree in Mathematics.

Thomas’ post-graduate internship with the NCAA, headquartered in Indianapolis, was the result of hard work during her collegiate career. She and 558 other applicants vied for the coveted positions at the NCAA headquarters. Thomas was one of only 25 chosen as NCAA post-graduate interns, and she was the only intern out of those 25 chosen invited to serve the NCAA Administrative Services group.

This Administrative Services group is responsible for supporting the NCAA’s financial mission, and manages its information, physical, human, and fiscal assets. Following an intense year at NCAA, learning the processes and procedures of the Administrative Services, Thomas’ dedication and commitment as a post-graduate intern was not overlooked. She has recently accepted a full-time position as the NCAA Finance and Accounting Assistant.

In Thomas’ new role, she is responsible for supporting all areas of Finance and Accounting, as well as providing continued support for Purchasing and Procurement. Her day-to-day routine includes a strong emphasis on association-wide financial analysis and reporting.